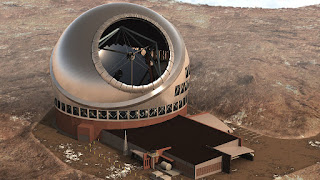 World’s Largest Telescope to be built at Mauna Kea Hawaii. This Telescope is Thirty Meter Telescope or TMT.

A N Ramprakash, director of TMT,India said India is playing key role in development of telescope.
“Indian industries are making the telescope’s sensors,actuators and its mechanical support structure” he said.
Sensors in Puducherry, actuators in Bengaluru, some components are being made in Mumbai. While work on control system is in progress in Pune.
India’s role is building and welding what is known as “First Light Instrument”. Many Indian Institutes are also part of this project. Which includes IUCAA, Indian Institute of Astrophysics in Bengaluru and Aryabhatta Research Institute of Observational Sciences.
It will have 12 times better spatial resolution than NASA’s Hubble Space Telescope as project manager at TMT Ravinder Bhatia said.