What Does Schrödinger’s Cat Experiment State?

What are the interpretations of Schrödinger’s cat experiment?

In this paragraph, we’ll see what this “dead and alive” actually means quantum mechanically.

What does observation have to do anything with the results of the experiment?

First of all, an observer plays a very important role in quantum mechanics. The simple act of observing the electron moving through a slit can totally change the consequences of the experiment. For instance, double slit experiment beautifully depicts the aforementioned fact. Before observing Young’s double slit experiment by a detector, the electron was giving totally different patterns than that after the placement of a detector. Hence, this is called the observer effect. There occurs a thing called wave function collapse that make this happen. Double slit Experiment of Quantum Mechanincs

What is the collapse of a wave function?

Here, I will try to make you understand this concept using a simple example.

Consider your friend is in her room. And you don’t know exactly where she is inside the room. Is she on the bed watching some series? Is she on her chair studying? Or Is she on the floor practising yoga? You don’t know for sure where she is exactly inside her room. But you know for certain that she is inside the room. The probability of you finding your friend inside her room is equal to one.

Now, we will distribute the probability of you finding on her bed, on the floor or on her chair. Now see carefully. Until if you have opened the door, you have almost a distributed function for all the possibilities. But once you open the door, you come to know where she is exactly. You realize she is on her bed. Therefore, suddenly, your view changes. The distribution function that you did before suddenly becomes one big mountain kind of graph in the bed category. Therefore, this is what you call that the wave function collapsed. Exactly the same occurs in quantum mechanics.

This graph shows three possibilities. They are: your friend on the bed, on the floor, on her chair. 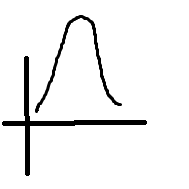 Here the wave function collapsed into a single wave. Ultimately, it shows that you found your friend on the bed only.

Collapse of the wave function in case of the Cat:

Participate in the biggest Physics quiz competition of 2020